Today I'd like to share a DIY project with you. It only takes a few minutes, and can likely be made for free with items you already own. I was talking to Leslie recently about how I have a little problem with the button of my jeans sticking out and making a big bump under my shirts. I wanted some kind of band that would go over it and hold it down. Plus I've recently lost twenty pounds and a lot of my clothes are a little baggy. I'm still hoping to lose a few more pounds so I'm not quite ready to invest in new pants yet. At the time of our conversation I only had one pair of jeans that fit. I've since found another pair hiding in my closet. They're ancient and out of style, but they fit. Tops aren't a problem. Some of them were starting to get a little snug, so now they're back to fitting properly. 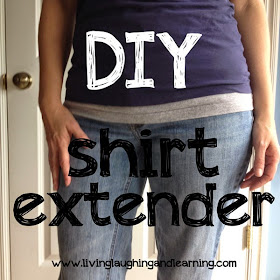 Somehow I knew that what I wanted existed, but I didn't know what it was called. In about two seconds Leslie had pulled it up on Google and told me they were called T-shirt extenders. That girl is a genius, I tell you.  They cost around $20 each, and I'm not about to pay that for something I can make for a few dollars or maybe even for free.

They are worn a lot by pregnant women who want to continue wearing their non-maternity shirts as long as possible, but they get a draft on their sweet little baby bumps. I remember that happening to me. Both of my boys were born in December, so I was in full bloom when it was cold outside. Also, they are great for wearing under tops that are a little too short and show some skin that you don't necessarily want showing when you raise your arms. I've even seen where you can use them 'up top' for extra coverage if you have top with a loose neckline.

The layered look is 'in' and is great when you need an extra layer for warmth, but sometimes with t-shirts it adds bulk and makesyour top layer not lay as smoothly as you would like. I love how this option gives you both the coverage and the style without the bulk.

The concept is so simple there really isn't a need for a pattern, and I headed to the fabric store. I came home with four knits. (I could have shopped from my own stash, but that's not as much fun.) I found a pretty peacock blue, a crazy pattern that I fell a little bit in love with. (I bought extra of it... you will see it again, I'm just not sure where.) and a basic black and white. The black and white are kind of a heavy duty knit like foundation garments would made of. They will hold in lumps and bumps, but they're not shiny. They were expensive at $16/yard, but they were 30% off and I only needed 1/3 yard each. 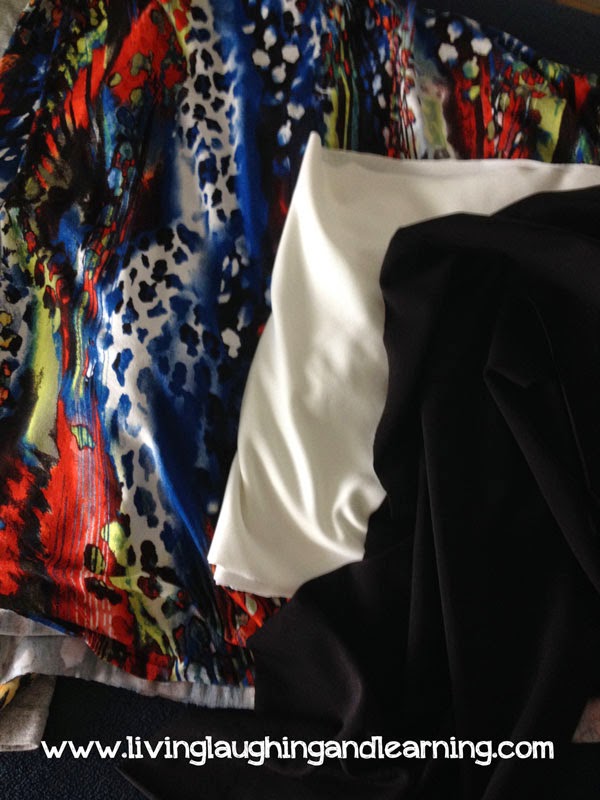 Before I took to my sewing machine I decided to look online for some tutorials to make sure I didn't miss any good tips. What I found was a FANTASTIC idea! Use t-shirts to make them. You can purchase inexpensive t-shirts in many solid colors at places like Hobby Lobby or Michaels. I happened to have a basket of them in the floor of my craft closet. I cleaned out my husband's clothes a while back. He lost a bunch of weight a couple years ago and still had a bunch of XL shirts in the closet. I saved some that had colors I like to use for projects that require knits. I've seen where people make skirts and scarves from t-shirts and thought they would make good bases for those projects.


The beauty of starting with a pre-made shirt is the bottom hem, the one that will show is already done. You don't have to worry about it puckering or doing anything weird. If you don't get the top perfect, it won't matter at all, because nobody will see it. Mine is actually pretty wonky and not up to my normal standard, but I am limited on time right now so I went with it. It will still serve its purpose quite well. 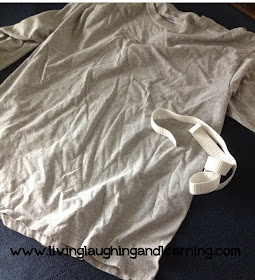 I found this gray t-shirt that was a good neutral to start with. It is LITERALLY only TWO seams to make this project. I suppose you could do this by hand, but I wouldn't have patience for that. I would have used my serger, but since I figured most of our readers probably don't have one, I used my regular sewing machine. Measure from your waist (a little high) to where you want the bottom of your T-shirt extender and add an inch or inch and a half. I wanted mine 8" long so I cut my fabric at 9 1/2". Then cut straight across. It would actually be good if you turned the shirt inside out first. 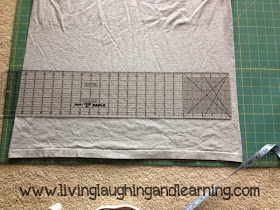 Then measure your waist at the top of where the extender will be. Cut your fabric to that width and sew a new seam up the side. 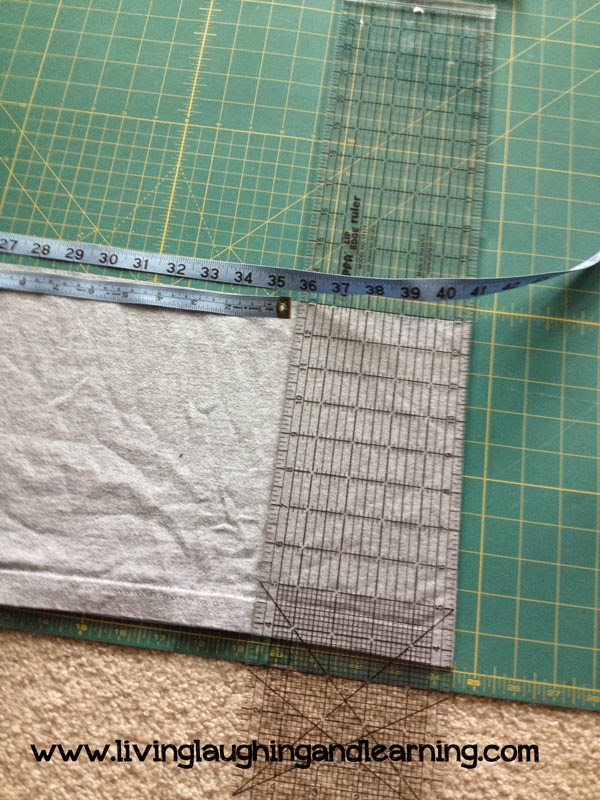 You won't need to fold over or anything like that. Just make sure you use a zigzag stitch so it will stretch and you won't be popping threads when you put it on.

I'm going to insert a funny story here... The 'popping threads' remark reminds me that one day this week my seven year old came into the kitchen after his bath. Usually these days he has his hair combed STRAIGHT down plastered flat to his head and it looks awful and he freaks out if I try to fix it. It's one of those battles I've decided not to fight. This day, he had his hair combed straight back in some new 'style'. I wouldn't say it looked good, but I'll take it over his usual style. I looked at him with big eyes and he grinned and broke into song and dance singing a PG version of "I'm gonna pop some tags, I got twenty dollars in my pocket! This is awesome!" He keeps us all in stitches.


Back to your regularly scheduled programming:

The only other thing you need to do is take a piece of elastic and wrap it around your waist. Cut it half an inch or so longer than your actual waist. You might be tempted to stretch it a little, but don't. If you have any 'fluff' at all you'll just give yourself a nice little muffin top, and I'm sure you don't want to do that. If you don't have any 'fluff'' I hate you  you don't need to do it anyway. 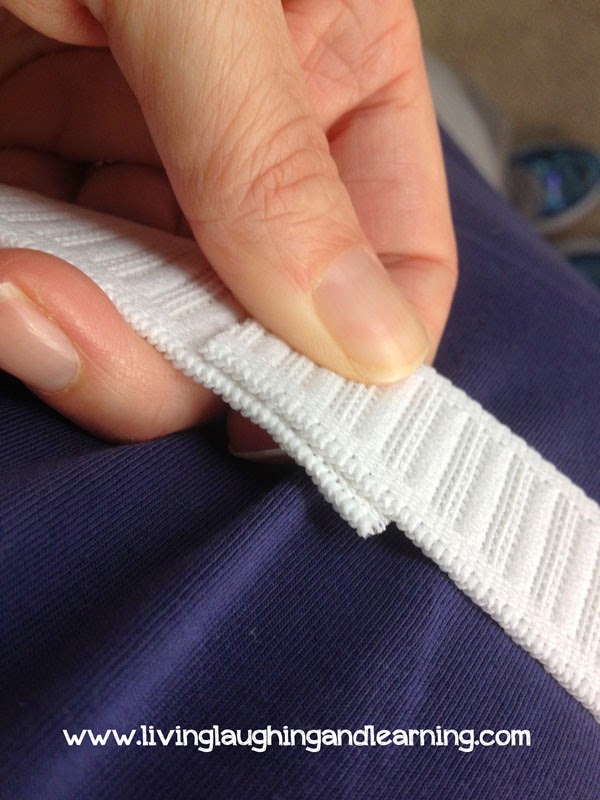 Now, this is where you are going to do as I SAY, not as I DID. I sewed the ends of my elastic together first, but it would be MUCH easier if you folded your top edge down, slightly wider than your elastic and did your zigzag stitch leaving a one to two inch opening at one of the sides. Then put a safety pin on the end of your elastic and thread it through that opening. Make sure it is not twisted inside the hem and sew both ends of the elastic together going over it several times to secure it. Then, stretch our your extender and the elastic will disappear inside. Now just sew up the hole and you're done! 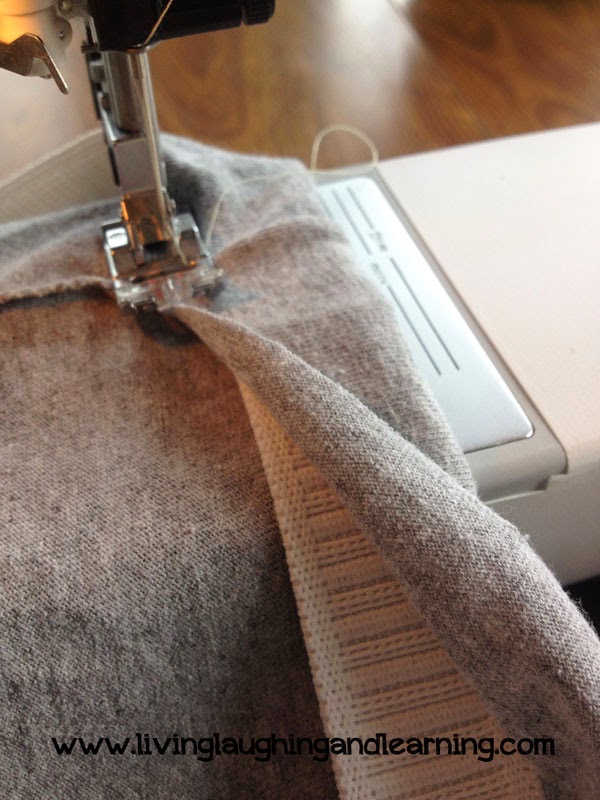 This project will take you less than ten minutes unless you are stopping to photograph each step. Then add five to your total time investment. I still plan to make more out of the fabric I bought, but I'm out of elastic. I plan to use a thinner elastic on the next ones I make. 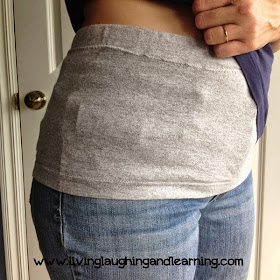 Oh my goodness.... I did NOT just post that on the world wide web! I have a 'back' view that I've decided might be suitable for all audiences. My husband was my photographer. I think he was confused about which part I was trying to demonstrate.

If you have a sewing machine I hope you will give this a try. If you do, let us know how it goes!

Thank you for visiting our site. We love hearing from our readers!